The Karma Club is set in the lodge of the Karma Club commune in Wells River, New Hampshire. The commune has been hosting a sending-off party for their guests, rock band Marmalade Skies.

Marmalade Skies had been invited to perform at a 3-day rock concert in Woodstock. Unfortunately their tour bus has broken down. Unable to make it to the concert, they are spending the weekend at the Karma Club commune before embarking on a 5-month U.S. tour.

The tour bus is now fixed and in the morning Marmalade Skies resume their tour. Tonight is the chance for one last party. Unfortunately, it has been marked by tragedy – Marvin Stank, Marmalade Skies’s manager, has been found murdered!

Break out your bellbottom jeans, wide belts, tie-dyed and paisley shirts – and join us at The Karma Club!

Rated 15+ (References to rock-and-roll lifestyle, infidelity and a child born out of wedlock) 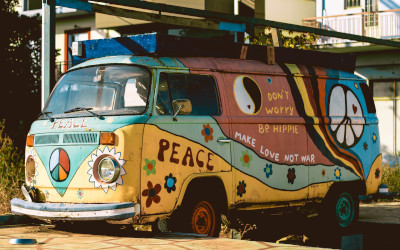