It is 1785, and the Caribbean is a hotbed of violence, treachery, the occult and, of course, piracy. Tortuga, an island off the north coast of Haiti, is home not only to peaceful plantations, but also to thieves, gypsies, scavengers, voodoo queens and grave robbers. Tortuga is also a pirate stronghold and a frequent port-of-call for the most feared pirates in the Caribbean.

Abel “Blackheart” Read, the Caribbean’s most nefarious pirate, had wrought havoc for many years throughout the region – but now his reign of terror is over. First, Blackheart and the Pegasus, his ship, was captured a month ago — and then two weeks ago Blackheart’s second-in-command, Calico Jack, ran his ship (the Orion) aground off Tortuga’s rocky north coast. With these two pirates (and their ships) out of business, the waters of the Caribbean are much safer.

They have also created a power vacuum in the pirate world – one that will no doubt be filled before too long.

Tonight, the Libra, a retired warship converted for commercial use, departs from Tortuga on its journey to St. Augustine, Florida. For some of its passengers, this will prove to be a profitable journey. For others, Tortuga may be the last dry land they ever see…

In Davy Jones’ Locker, the course of this fateful journey will be played out over the course of a single evening. There are, among the passengers and crew, an ex-pirate, a gypsy, and a nun. However, not everyone is who, or what, they seem. Some (well, all) of those on board have mysterious secrets and will do anything to prevent them from being revealed.

Rated 15+ (Plot about elopement, reference to voodoo and gypsy magic) 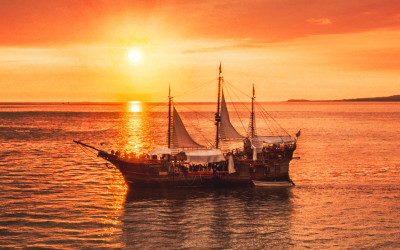