The world is in jeopardy. As usual. And as usual, it’s up to the SuperHeroicJusticeDoomSquad to save the day. The problem is that they all had a big party last night celebrating something exciting that they can’t quite remember; and this morning, their manager Bernard was found dead on the lovely faux-sheepskin rug in their Lounge.

Their secret base, the location of this party, has impenetrable defences (being inside a giant dormant volcano, naturally) and it was locked shut all night – so they have come to the realization that the killer must have been one of the Squad… or possibly their cleaner, Miguel.

The big red ‘World in Danger!’ light is flashing in the control room, so they really need to get out there and defeat the bad guys, but there’s another problem. Bernard was the only one who had the access code to the main computer which controls everything, and it somehow got logged out last night. Now the Heroes can neither speak to the outside world to find out what crisis is going on this time, nor can they turn off the SuperHeroicSuperiorAlarmSystems alarm and leave the base. The outside door (which is controlled by the main computer) is locked shut until the alarm system can be reset, and it has been specially made to withstand anything.

Our heroes need to find a way to get out of the base in time to save the world – and find out which of them is a murderer, and why – before it’s too late! 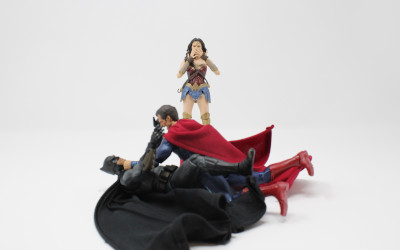